The extension is compatible with the Hyvä theme. 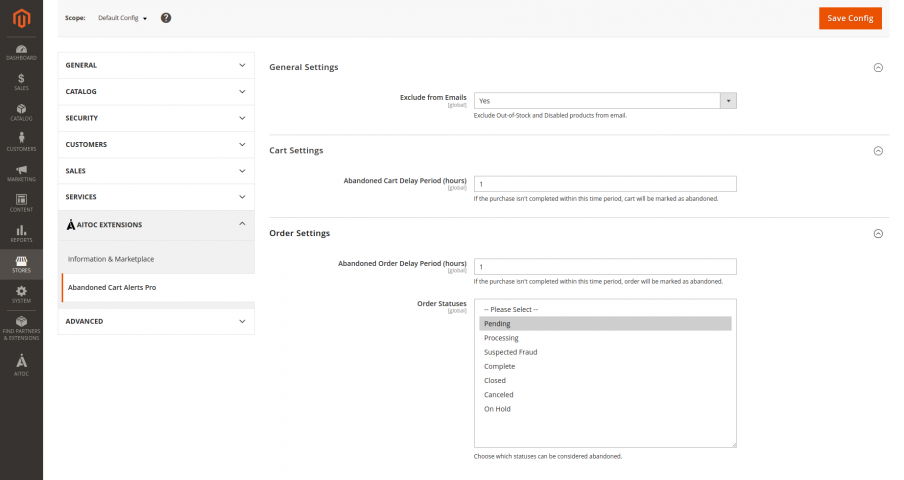 Turn hesitating visitors into buyers with a smart email marketing strategy. Incentivize more purchases with flexible email offers spread out across multiple emails. You decide how many emails should be sent and what exact offers and discounts they contain. Adjust campaigns on the go for even more flexibility.

Cart abandonment rates can be significantly minimized with an effective email marketing toolset at your hands. This is how Abandoned Cart Emails for Magento 2 can benefit to your business:

Engage Customers Into a Conversation
A customer has added a product to the cart, but he didn’t buy it after all. Why? The answer to this question will be fundamental for improving your existing strategy and customers’ feedback is exactly what you need here. By sending abandoned cart emails, not only you remind buyers about items left in cart, but also find out the reason why those products were abandoned in the first place. Direct communication with prospects helps store owners to bring valuable insights into possible options for improvement.

Boost Conversion Rates
Abandoned carts inevitably decrease the ecommerce conversion rate. Kind emails reminders have the power to resolve this issue. If properly designed and written, they will encourage buyers to come back to the store and finalize the purchase, turning more prospects into actual customers.

Optimize Email Marketing Efforts
Once you set up the abandoned cart email template using the extension, you can configure the required trigger actions and set up optimal time for email delivery. As soon as a trigger takes places, the module will send out an email in a completely automated way, saving your time and money on performing this task manually.

Convince users to go back and finish their order. Sweeten the deal with custom offers.

Send Your Email at the Right Moment to Close the Deal

15% of users say they would buy a product if they are offered a discount. Give these customers a reason to return to your store. Make your message irresistible!

Make Gradually Better Offers if the First One Didn’t Work

Some people won’t be impressed with your first deal. Make them an even better one.

2. Ensure that all your emails match company style and brand book guidelines

Abandoned Cart Emails Pro is fully GDPR compliant. The extension sends out emails to customers who have already registered with your website and have agreed to process their data by the Magento store. And since they added some products to their Cart view they have demonstrated genuine interest in company’s merchandise.

All users can also unsubscribe from Abandoned Cart email alerts by clicking Unsubscribe on any email they receive.

All Features of Abandoned Cart Emails Pro for Magento 2 plugin

We aim to keep our modules regularly updated with new features, bug fixes and compatibility improvements.

We are happy to consider adding new features to our products. Please click below to tell us what you'd like to see.

+Campaigns can be filtered now;

+Added an option to enable / disable discount code included in the Abandoned previously);

+Added an option to change the discount amount (was only 10% previously);

*Fixed a bug where “Exclude out of stock” feature did not work;

*Fixed an issue with the Campaign's Delay Period setting not saving entered value;

+The extension is compatible with Magento 2.1.2;

+Added general setting - time interval after which to consider a cart as abandoned;

*Fixed an issue with incrementing recovered carts qty and value in statistic.

We realise that you have a choice when it comes to suppliers for Magento modules. However, we believe that Aitoc's history and pedigree is second to none.

Our company was founded in 2001, and we've been working with Magento since 2007.

We've been providing Magento modules since 2007. Our company was formed in 2001.

We have built hundreds of modules. We provide our customers with affordable prices and high quality standards.

Our developers have proven knowledge, and our support specialists have exception problem-solving and communication skills. Together we are always ready to help you.

93% of our clients rate us 5/5 for product and support quality. We have a client-orientated structure to effectively work for all our customers and fit their needs.

Aitoc is not just about great modules. Our professional services team are ready to help you improve your ecommerce site with a range of optimisation and development services.